skip to main | skip to sidebar

Saturday we woke up to SNOW! The one day of the week we wanted, no needed, sunny skies, we got snow. Despite the blowing, drifting and sometimes heavy snow in the morning, by noon it seemed that it would let up. So we opened the office for the sale and then the snow started falling again.

Gardeners are a hardy lot. Tempt them with free seed catalogs and they will brave snowy, drifting roads. And that's what 52 gardeners did! We were very pleased that despite the weather we had a decent turn out. We had catalogs available from Seed Savers, Baker Creek Seeds, Territorial Seeds, and Sand Hill Preservation Center. By the end of the sale we had only 4 catalogs left, and those were being saved for people who had called and couldn't make it to the sale. We sold over 200 packages of seeds. Considering the weather it was a good turn out.

We have a good variety of seeds left. They are for sale in the Roger Gustafson Nature Center at 603 Appleton Road, Belvidere, IL. Office hours are M-F 8:00-4:30.

Also because of the weather the Gourd class was rescheduled for March 14. There are still openings for that class.
Posted by The Heritage Gardeners at 2:00 PM No comments:

The Legend of the Corn Beads

As they walked along the trail, their tears fell to the ground. At the place where the tears fell, a shoot that looked like a cornstalk grew. As the plant bloomed and opened up, seeds of gray fell to the ground. Creator said, “This will be a sign unto all who pass that my children will always be a part of this land. The cornstalk represents life for my children and the seeds of gray represent suffering and sorrow.”

The trail the Cherokee people walked is now known as the Trail of Tears and the seeds are known as corn beads.

Corn Beads are actually Job's Tears or Coix lacryma-jobi a plant in the grass family.

This plant comes from Asia and has been naturalized in the southern United States. The tears or seeds are hard shelled but have a natural hole in them which makes them perfect for using as beads. They have been used to make necklaces and rosaries.

I received these corn beads from one of our volunteers who grows them in her garden here in northern Illinois.

Below I show the beads being strung on stretchy cord and being made into a bracelet. I added some green stones that had holes drilled in them.

If you would like to be entered into a drawing to win this bracelet, e-mail your name to bccdheritagegardens@gmail.com. I will pick a winner on March 17, St. Patrick's Day.

Posted by The Heritage Gardeners at 11:14 AM 2 comments: 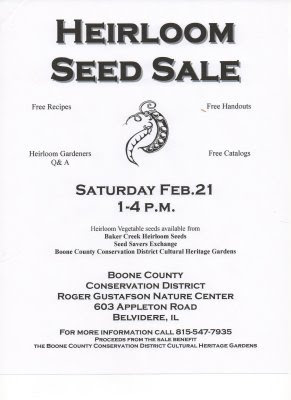 Here is a copy of the flyer that we are sending out for our seed sale on Feb. 21. The sale will be held at the Roger Gustafson Nature Center, 603 Appleton Rd. Belvidere, IL. Time 1-4 Feel free to copy the image and print it out.

The sale will be held in the afternoon because in the morning we are having a gourd craft class. For $5 you get a large gourd and learn how to transform it into a bowl, vase, water bottle, birdhouse, or whatever your imagination comes up with. Space is still available. Call the BCCD office to sign up at 815-547-7935.
Posted by The Heritage Gardeners at 6:47 AM No comments:

The gardens are open for group tours and to the public during special programs throughout the year. Spencer Park is open year round to the public and has many walking paths.

Visit the Boone County Conservation District website to see more about the gardens and the many conservation areas open to the public.

This blog is dedicated to Roger Gustafson. Roger developed the Boone County Conservation District and the Heritage Gardens in the 1980's. Roger worked in the gardens up until the time he died this last year.

Garden by the Moon